6 World Records Broken at A Casino

Usually, when one thinks of a casino you imagine the casino tables, slot machines, all the flashy lights, and personnel dressed in shirts and bow ties. And, while casinos are most known for making dreams come true, on occasion casinos are used as venues for exciting events too. The events hosted at the casino may or may not be related to gambling. And the kind of world record broken at casinos outside of gambling will surely surprise you. Below we count down 6 of the most interesting world records ever broken at casinos in Canada and around the world.

The Hard Rock Hotel and Casino in Hollywood celebrated the opening of its brand-new parking garage with a guitar smashing ritual. The hotel-casino itself is shaped like a guitar which makes sense why guitars are being smashed and not white plates like in other traditions. More than 1900 people showed up at the event that day.

Magician Ricky Smith wowed the audience at a Canadian casino when he threw a playing card across the room approximately 216 feet at a speed of 92mph. How he did that remains a mystery, but Ricky is well known for his playing card tricks and has appeared on shows like America’s Got Talent and Shark Tank for it. In 1994 another magician named Ralf Raue also managed to pull off a playing card trick. He managed to hold 326 cards in a circular formation with each card’s face value visible. This is applaudable as many of us struggle to handle the few we get dealt in some games. 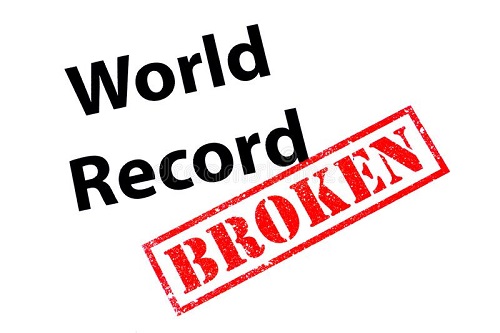 This next casino world record truly personifies going over the top. In 2004 a wedding cake showcased at the New England Bridal Expo fed about 59 000 people because of how massive it was. The cake stood about 17 feet tall and weighed 13 000 pounds! One can only imagine how much effort and baking ingredients went into baking that thing.

Stephen De Raffaele deserves the employee of the year award for the record-breaking time he spent dealing in a game of blackjack once upon a time. Generally, casino staff works an 8-hour day like many other people. But between August 24-27, in 2001 he spent over 51 hours dealing cards in blackjack with only 15-minute breaks in between. Let’s hope he received a better paycheck that month too.

Here’s to another food record broken inside a casino and this one really has us drooling. A casino in Minnesota, USA was home to the making of the world’s largest bacon cheeseburger ever made. The winning burger during a Big Burger Bash event weighed over 2000 pounds and had a width of about 10 feet. The ingredients used to make the burger included pickles, bacon, cheese, and of course, burger buns. They say that if a single human being was to eat the burger he/she would consume 4.1 million calories. You would also instantly become overweight and will probably have cholesterol problems by the time you’re done eating.

US architect, Bryan Berg, really showcased his true talent when he built the largest house of cards ever made using playing cards only. He built a replica of the Venetian casino in Macau using more than 218 792 cards that consisted of over 4000 decks. He spent 44 days building the casino. That’s 44 days of his life that he’ll never get back.

Out of all the world records we mention above our top pick goes to the free-standing house of cards. The patience, sturdiness, and architectural skill that must have gone into building a casino made from a lightweight material like playing cards deserves recognition from us. The largest cheeseburger ever made comes a close second simply because it sounds delicious!

How Long Does a Keno Game Take?

Is There an Algorithm for Keno?

What Is the Best Seat at A Blackjack Table?