Pontoon is one of the many exciting variations of the popular table game, blackjack. The game has a few distinct rules and features that make it different from playing blackjack the traditional way.

If you would like to know more about this version of the game, and how it works then you’ve come to the right place. This dedicated Pontoon guide is perfect for new players, as well as those just wanting to brush up on their knowledge of the game.

Pontoon might be a very close cousin of blackjack, and there may be blatant similarities between the two. But, you must be able to tell them apart if you want to play the game correctly. Here are some of the differences in gameplay between pontoon and traditional blackjack. You’ll notice that the major differences between the two games have a lot more to do with a change in terminology than anything else.

In Pontoon, if you would like to get another card, this is referred to as “twist”. And, if you’ve played traditional blackjack before, the corresponding term here is “hit”. Similarly, if you do not want to receive another card, we call it “stick”. You’ll remember from playing classic blackjack that the corresponding term for this is “stand”. Doubling down in Pontoon is called “buy”. 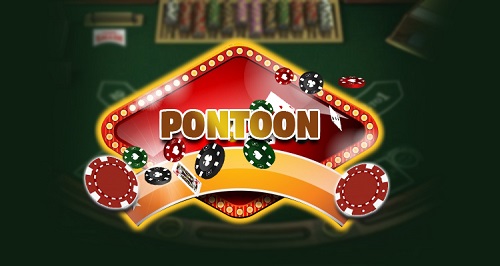 Pontoon also has unique rules when it comes to doubling down, strategy and ties. In Pontoon, you are allowed to double down before hitting. The game also allows you to double down with a hand that has more than two cards. In the traditional blackjack, doubling down is only allowed with your initial two cards.

In the traditional blackjack, a tie between the house and the player is called a push and in this case, all bets are returned and a new round begins. In Pontoon, ties favour the house. This means that even if you achieve a hand of 21 if the dealer does too, the dealer wins. Pontoons – which is a hand that consist of an ace and any 10-value card pays 2:1, which is less favourable than a natural blackjack which pays 3:2. This somewhat accounts for the added house advantage found in Pontoon.

One of the unique features in Pontoon is called The Five Card Trick and this isn’t a feature commonly found in traditional blackjack. Five Card Trick simply offers players an alternative way to win in the game. The clue is in the name, for this winning hand, you must collect a five-card hand that equals 2 or less. This five-card hand pays 2:1 and surprisingly beats a natural Pontoon hand that consists of two cards with one being an ace and the other any 10-value card.

A typical game of Pontoon uses about 4 to 8 Spanish card decks and each deck has 52 cards in it. Here are some of the rules that control how the game is played.

How to Play Pontoon Online

How the game goes is fairly easy to understand, and even if it does get a bit confusing at the beginning, you will quickly get the hang of it the more you play. Follow our simple steps to get started. 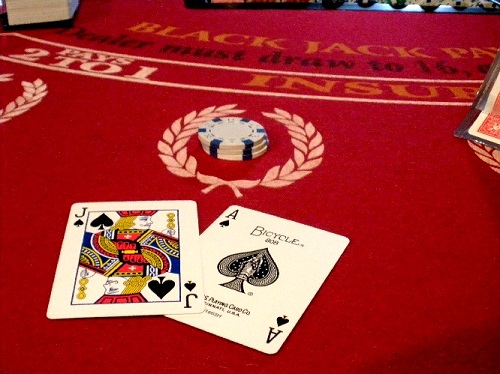 What is a pontoon in Blackjack?

A pontoon refers to any 2-card hand that has an ace and any 10-point card in it. It is the best possible hand, and quickest way to an actual payout.

How do you play Pontoon Blackjack?

We’ve detailed how to play Pontoon in our guide above. For the most part the gameplay flows similar to classic blackjack, with the exception of a few non-negotiable rules.

Why is it called pontoon?

Many people have their own versions about the origins of the game, and its still unclear which one is true. But, our sources say that the name came from a soldier who fought during the British World War 1.

How is 21 pontoon played?

Pontoon is played with on standard pack of cards, excluding the jokers. Aces carry a value of 1 or 11 while picture cards, namely K.Q and Jack carry a value of 10. All other cards carry face value. The aim is to build a hand that equals to 21.

What are the rules of pontoon?

No, five card trick beats pontoon and we’ve explained how and why that’s the case above.