The gamblers fallacy is the assumption that the likelihood of a single outcome is different from the possibility of a series of possibilities. When the events in question are independent and equally dispersed, the gambler’s fallacy can be real and true.

For instance, the ball must now land on red. It’s time to make the bet. We frequently hear these and similar statements, particularly during an event involving chance. This is especially true for gamers of casino games. The ball somehow lands black again, and the all-star player grounds out for the 15th time. What might possibly have caused this?

Even though it feels appropriate, an event’s probability does not necessarily alter from one instance to the next. The Gambler’s Fallacy is the name given to this erroneous argument. The phenomena occurs in business, in the courts, and in the casino all too frequently. 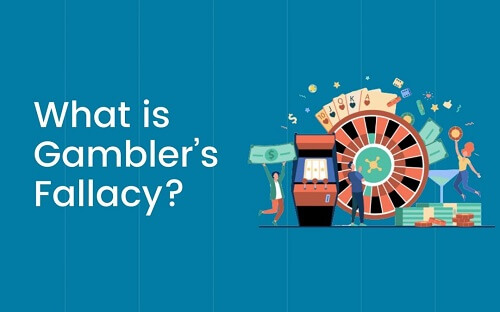 The Gambler’s Fallacy is the misguided idea that if something happened more frequently than predicted in the past, it will happen less frequently in the future, and vice versa. Even if the events are unrelated, it’s easy to become caught up in this mindset.

In other words, we erroneously rely on a law of averages when each case has a set chance. Simply failing to see that previous events have no bearing on future events can result in serious consequences.

As gamblers, we forget that gambling is a risky form of entertainment. While some games require skill as it can improve your chances of winning there is still a level of luck that is needed. The same goes with games of luck. You can’t rely solely on the fact that because something happened frequently in the past that it will occur less in the feature and set your bets on that.

The gambler’s fallacy has the potential to impact people’s thinking and decision-making in domains other than gaming. The Gambler’s Fallacy can be found in a variety of situations, some of which are more dangerous than others. Consider some well-known cases and their poor logic.

the incorrect idea that if a coin lands on tails numerous times in a row, it will inevitably land on “heads” next.  So, if you toss a coin and the first 5 times it lands on tails gamblers’ fallacy suggests that you will assume that after a few times of tails being the outcome, the coin will land on heads next to even out the 50-50 chance of the fixed probability.

Another notable example of the gambler’s fallacy in the context of gambling occurred in a 1913 incident at the Monte Carlo Casino. What happened was that the ball consecutively fell on the black color 26 times in roulette. This was such a rare occasion that saw many gamblers place their bets on red for the next bet. Unfortunately, many gamblers lost millions betting that the ball would fall on red throughout the streak, in the misguided belief that the ball would land on it soon.

Unlike with the coin toss, with the dice, the fallacy is that if the dice or die land one number the first couple of times, it is bound to land on that number again.

We all come across the Gambler’s Fallacy from time to time. Consider the fact that the dice do not remember past rolls and that the ball has no influence over future spins. Don’t base your decisions on irrelevant previous events; instead, assess current odds.

We know that a winning or losing streak must come to an end at some point, so we bet on it. Many players try progressive wagering, despite the fact that many betting methods do not account for long losing streaks.

You must be aware of the independence of each event to avoid the Gambler’s Fallacy. Just because a game’s return on investment is 97% doesn’t mean that amount will be reflected in the few rounds you play. For the math to balance out, it can take thousands of spins or dice rolls.

The expectation that even brief sequences of results will be highly indicative of the process that generated them, as well as the perception of chance as a fair and self-correcting process, are the main causes of the gambler’s fallacy. Remember that a sequence of highly unexpected outcomes can reveal that the actions in question are not completely random or independent of one another when resolving the gambler’s fallacy.