What is the Card Game in James Bond?

If you enjoy James Bond movies then you might have seen him play card games in movies like Dr No, GoldenEye, On Her Majesty’s Secret Service and Thunderball. And while you’ll see him enjoy a number of card games, Baccarat Chemin de Fer seems to be his favourite. Although, in later movies like the 2006 film, Casino Royale, you see him enjoying other games like Texas Holdem Poker.

Baccarat is a good choice of game for a character like James Bond. It has a reputation of being a high rollers’ game where the stakes often go high. It’s also a fairly sophisticated game that ties in nicely with the kind of lifestyle that James Bond lives.

Various types of baccarat games exist but James Bond is seen playing a particular variation called chemin de fer. This variation has French origins and is also the most original version of the game.

In a typical game of chemin de fer, the dealer uses 6 decks of playing cards which is frequently shuffled together. 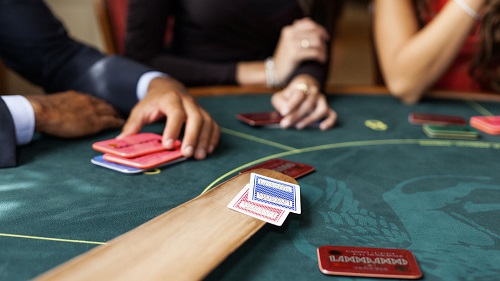 One baccarat chemin de fer session can accommodate a number of players who are all seated around a semi- circle-shaped table facing the dealer. After all bets are in, cards are dealt in a counterclockwise rotation.

The aim of the game is to bet on whether you think the banker or the player will form a hand that equals 9 or closest to it. Card 2 through 9 carry face value, K, Q, J and 10 have 0 value while an ace is valued at 1.

It’s worth mentioning that while the game of choice in James Bond movies is baccarat, there exists a game called James Bond which has nothing to do with the movies or character himself. The game is otherwise known as Chanhassen or Atlantis and is most played in California, Sweden and Britain.

The game uses a standard deck of cards, excluding the joker and can host up to three players at a time. but is typically played between two players. If you are playing against one other player each of you will receive 6 piles of cards where each pile consists of 4 cards. If three of you are playing each player will receive 4 piles of cards instead of 6. All remaining cards in the deck are placed in a central position between the players and act as community cards.

The Objective of the Game

The aim of the game is to form a pile of like cards e.g. four kings or four number 2s. So, when the dealer yells play, you will each lift one pile at a time to see what you have. You may discard one of your cards and replace it with a card from the community pile in an effort to form a pile with like cards. But, when you switch cards with the community pile be sure to not play in the favor of your opponent.

For example, if you have a pile that is K, 7, 4, 4 and the community pile cards have a 4 then you might want to trade your K or 7 for that card. But be careful with what card you choose to swap in this instance. If earlier in the game you saw your opponent trade one of his cards for a K in the community pile then it’s obvious, he is trying to build a pile of kings so you would rather trade your 7 and not afford them that potential win.

Remember, you are able to play baccarat at any of the casinos that we list here at cancasinos.ca. Simply register an account to play for real money.

How Long Does a Keno Game Take?

Is There an Algorithm for Keno?

What Is the Best Seat at A Blackjack Table?

Home » What is the card game in James Bond?