What Casino Games Use Dice?

Dice games are fun and simple games to play, whether at a casino or anywhere else. As a result, some games have attracted more attention than others. Below we list the most popular dice games that you should consider trying out. Even if we already have some you have played before; you should try out those you haven’t played before.

Some of these dice games are available at online casinos that we recommend. They are available to play for real money and free. So, you can sign up to try out. 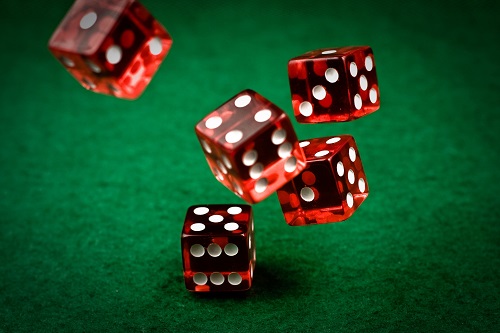 Most dice games are fast-paced. That is why if you are new to dice games, it is better to try them out for free online first. That way, you familiarise yourself with the gameplay. Below are the four popular dice games you can play:

This casino game looks very intimidating just by looking at the table. That is because it offers so many betting options, and that is reflected on the table. However, the game is very simple to play and understand.

Two dice are used to play the game, and you will have to bet on the outcome of the rolled dice. The table reflects the two dice outcome possibilities. The game is played the same whether playing at a land-based or online casino. However, playing online craps allows you to play for real money or for free.

Here is another popular dice game available at casinos. Similar to craps, you also have to bet on the outcome of the dice. The difference is that sic bo uses three dice which offers even more betting options.

Instead of throwing the dice, for sic bo, the dice are shaken in the glass container. Bet on the possible outcomes of the three dice. The table will have all the possible combinations that can come up, and you place your bets on the table and outcome.

This dice game is also known as birdcage that is played with three dice. The game can also be considered a variation of sic bo, but it is derived from the grand hazard game. The dice cage used will be rotated and then reveals the outcomes once the dice land at the bottom.

Even though there are many possible outcomes from the three dice, there are only a few outcomes that you are allowed to bet on for Chuck A Luck. This makes the game much simpler as compared to sic bo.

Many casinos offer Hazard as an alternative game to craps. The game does not also require a table to be played. It is played with two dice and other people to play with. A setter needs to be decided on, and they will take the bets. What’s more, you will decide on what the prize for the winner will be.

Hazard was introduced first before craps and became the base for the origins of craps. The game was popular in 14th century England. However, it has lost its popularity as compared to the other dice games.

Home » What Casino Games Use Dice?